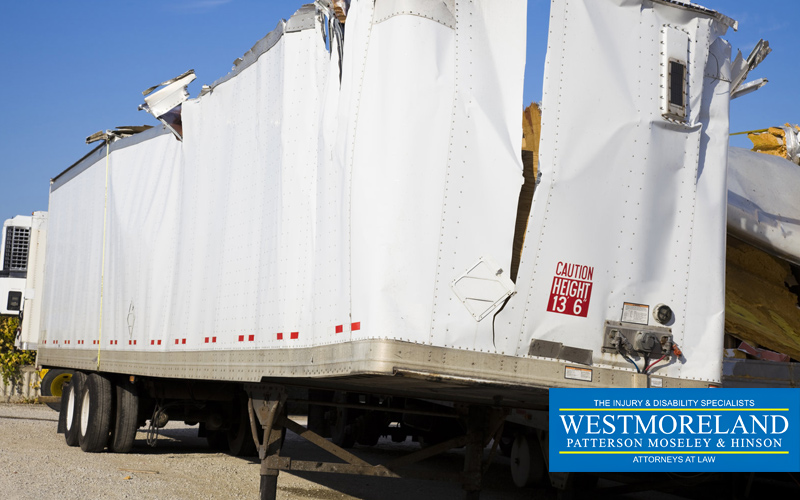 If you’re hurt in a truck accident in Georgia, reach out to Westmoreland Law today

A typical, fully-loaded semi-truck weighs upwards of 80,000 pounds, whereas a conventional passenger vehicle is likely to weigh anywhere from 3,000 to 6,000 pounds. As such, a semi-truck has the capacity to produce substantial damage to property, cause devastating injuries and often bring about death. By familiarizing yourself with the various kinds of truck accidents known to occur, you stand a better chance of preventing or avoiding such an incident.

If you or someone you love has suffered serious harm in a truck accident in Macon, GA, you may be entitled to pursue compensation. A seasoned truck accident lawyer at Westmoreland Law can review the facts of the case and determine how best to proceed.

Here are some of the most common types of truck accidents known to cause injuries, damage and death.

Head-on semi-truck collisions are especially deadly. Head-on crashes involving trucks can happen when a semi operator somehow loses control and the truck veers into oncoming traffic. This could be due to driver distraction or perhaps the use of alcohol or a controlled substance. Truck driver fatigue stemming from employer demands and rigorous schedules can also play a role in these types of incidents.

When a semi-truck driver is moving too quickly for prevailing road conditions, is following too closely behind another driver or is distracted in some way, rear-end collisions can occur. Because trucks are so large and so heavy, they need additional space and time to be able to stop or steer clear of emerging dangers.

If a nearby vehicle makes a sudden stop or an unexpected maneuver, there may not be time for a semi-truck to slow down. It is recommended that truck drivers leave no less than a 5- or 6-second gap between themselves and the next vehicle to prevent rear-end crashes. If a large truck appears to be driving too closely behind you, it may be wise to pull over and give them the freedom to pass.

An incident of this sort is essentially a rear-end crash, but it brings with it an enhanced risk of harm and even death. Underride crashes occur when a passenger vehicle hits the back end of a truck and slides beneath the trailer itself. When this happens, a car can become stuck and may be dragged along until the truck driver realizes the problem and comes to a stop.

As is the case with other types of accidents, underrides can be caused by driver impairment, distraction or fatigue.

Also referred to as broadsides or T-bones, side-impact collisions are less commonly seen with heavy trucks. But when they do happen, the outcomes can be extremely severe. When a side-impact crash happens, the entire weight of a truck collides with a passenger vehicle, likely having a devastating impact on anyone inside.

Truck operators who run red lights or disregards stop signs due to distraction or impairment can produce a crash of this sort.

It is important to remember that semi-trucks are comprised of 2 major components: the trailer and the cab. These are connected by a hitch. Jackknife events happen when the trailer keeps moving on the pivoting portion of the hitch, while the cab remains stationary. As the trailer swings toward the cab, it gives a jackknife appearance.

In many cases, improper braking is to blame. Drivers who erroneously brake too fast or use the engine brake when they shouldn’t cause a skid and then a jackknife. This can create an unavoidable hazard for a passenger vehicle, which can cause a chain-reaction crash with other cars.

Typical semi-truck accidents often produce injuries for the occupants of other passenger vehicles, but truck drivers can frequently emerge unscathed. When a truck driver loses control of the rig due to excessive speed or overloading, curves can become deadly. Tire blowouts are another key risk factor known to produce rollover crashes involving heavy trucks.

Truck accidents related to cargo can result from loads that have been poorly secured or vehicles that have simply been overloaded. When an event of this nature occurs, cargo ranging from flammable liquids to heavy equipment can fall out of a trailer, producing a serious risk of harm to other motorists. It is also not uncommon for cargo spillage to result in a chain-reaction pileup.

Get help from an experienced truck accident attorney in Macon, GA

When you or someone close to you suffers serious harm due to a semi-truck accident, it is vital that you contact a seasoned truck crash lawyer as soon as possible. They will be able to review your case and advise you on available courses of action.

To protect your right to pursue fair compensation and accountability from responsible parties, now is the time to act by consulting with a Georgia truck accident lawyer at Westmoreland Law.