High Speed Police Chase on I-75 Ends in Macon, GA

A high-speed chase that started in Worth County ended in Bibb County after the Georgia State Patrol reported a driver traveling 88 mph in a 55-mph speed zone around 2:00 pm Wednesday, December 9.

According to state troopers, the Worth County Police asked for assistance with a vehicle pursuit after attempting to stop the driver of a dark blue Challenger. Instead of stopping, the driver entered I-75 and drove recklessly from Worth County through multiple counties.

Crisp and Dooly County Sheriff Offices, as well as units from the Motor Carrier Compliance Division (MCCD), later became involved in the pursuit until a trooper took over in Houston County around 2:30 pm.

The driver of the Challenger was chased through Houston, Peach, and Bibb counties before spinning out of control after the trooper performed a pursuit intervention technique (PIT). The driver’s car hit a guardrail on I-475 North just before Eisenhower Parkway and skidded to stop in the grass.

The driver attempted to flee on foot and was in the process of jumping a fence when a MCCD officer tased him. He was transported to a hospital after complaining of injury, and 2 passengers in the vehicle were later released and clear of injuries.

Warwick Police Department and Georgia State Patrol are placing multiple charges and warrants for the driver in this case, and while no injuries to bystanders were reported—or damages to personal property other than the vehicle being pursued—this is not always the case during a police chase.

Is a driver liable during a police chase?

Damage caused to roads, pedestrians, other drivers, and city property during a police chase is often severe. Knowing who’s responsible for the cost of repair is important and often falls to a lawyer to determine liability.

Drivers owe a “duty of care” to pedestrians, other drivers, and cyclists. In tort law, a duty of care is the legal obligation individuals have while performing any acts that could foreseeably harm others.

In the event of a police chase, the suspect is often held liable for the destruction and harm to everyone and everything they passed during the pursuit. They may use other drivers on the road, pedestrians on sidewalks or items to delay police in the chase and cause additional harm or put others in danger.

The more serious the injuries to other drivers and damage to properties, the worse the charges may be against the driver.

This could lead to both criminal and civil charges with multiple claims against them.

If a driver engages in reckless driving that causes distress, physical injury, or property damage during a police chase, then that’s grounds for negligence. In the case of the driver stopped in Macon, they were driving 33 miles over the posted speed limit when the police initiated the chase—this is considered reckless driving.

Not only is it possible that the driver could be held liable for property damage to other vehicles and roads, but they could also be charged for breaking speed laws and inflicting emotional distress and medical injuries. 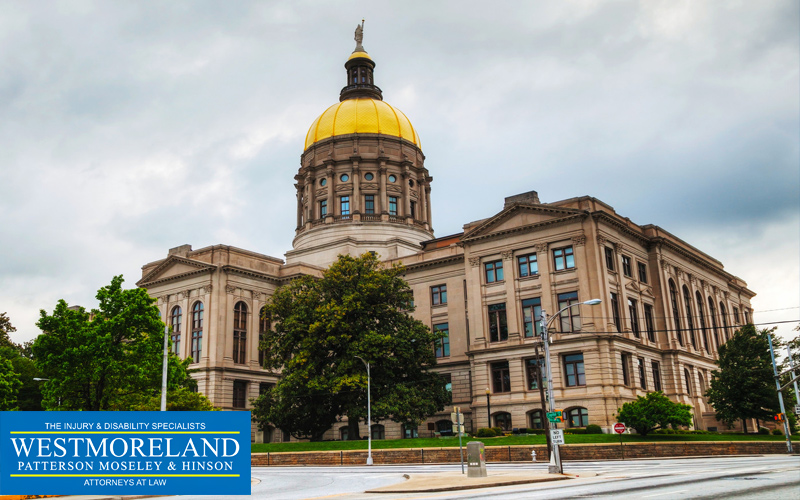 Negligence is the legal foundation upon which most personal injury cases rely, which is why it’s vital that accident victims have a basic understanding of how it is defined and handled under Georgia law.

Find out how negligence law relates to your injury case

Can the police be held liable during a chase?

Some states don’t permit police to initiate a high-speed chase. Depending on the location and circumstances, the state supreme court may require officers to drive at reasonably safe speeds when chasing a criminal and hold them liable for property damage and injury if they don’t.

Police may owe a duty of care to bystanders and the driver they’re pursuing—in other words, they can’t harm anyone unreasonably.

Instead, officers are required to exercise caution and act on a safer alternative before resorting to a chase. This depends on a number of factors, such as the number of bystanders, the location of the suspect driver, road conditions, and the offense the driver committed before driving away.

Who can help determine liability?

If you’ve suffered from a personal injury or damage to property during a high-speed chase, contact our offices in Macon, Albany, and Warner Robins today. The Georgia lawyers at Westmoreland, Patterson, Moseley & Hinson can help you recover damages and offer a free initial consultation to discuss your case.