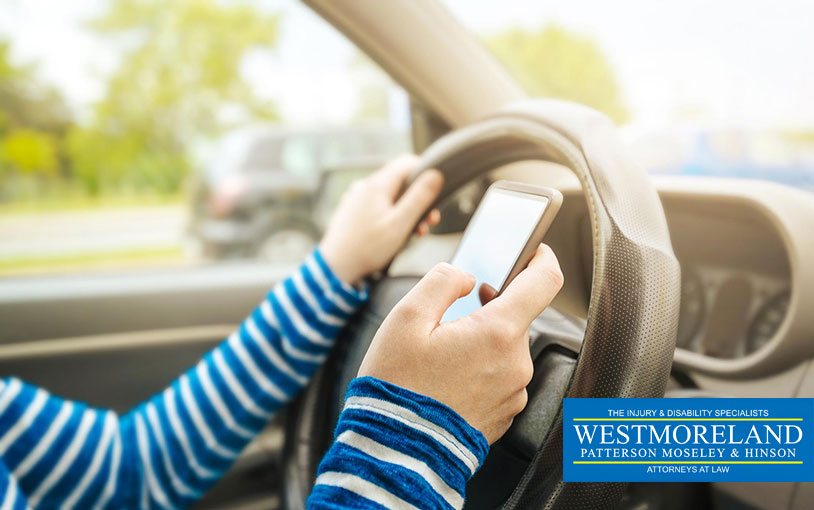 Reports show that many teenagers in Georgia text while driving; this and other distractions may contribute to over half of serious teen car crashes.

In 2013, over 424,000 injuries and 3,154 deaths across the country were attributed to distracted driving, according to National Highway Traffic Safety Administration data. As many people in Macon know, this behavior is especially problematic among young people. Teenagers often are more accustomed to using technology while doing other things, and as novice drivers, they may be more likely to experience accidents while distracted.

In Georgia, it is illegal for teenagers under age 18 to use their cellphones for any purpose while driving. Still, new reports indicate that many teenagers still text or engage in other equally risky distracted driving behaviors.

WABE News recently reported that the majority of younger drivers in Georgia have texted while driving. According to data from the state Department of Transportation, 82 percent of these drivers have texted while at the wheel at some point. Troublingly, 77 percent of these teens think that they can safely text while driving, despite extensive research that suggests the opposite. Given these misperceptions, the proportion of teens who engage in other risky distractions may be just as high.

A study from the AAA Foundation for Traffic Safety recently highlighted the prominent role that distraction may play in accidents involving teen drivers. According to CBS News, researchers reviewed dashboard camera recordings taken during nearly 1,700 of these car crashes. They found that distraction played a role in 58 percent of the moderate to severe accidents. This represented a more than fourfold increase over the rate that the NHTSA previously estimated.

The two most common distractions observed in this study were cellphone use and interactions with passengers. The first distraction is explicitly illegal in Georgia. The second is addressed through graduated licensing laws, which limit the number of passengers that recently licensed teen drivers can have. Unfortunately, teens may not always follow these laws. Additionally, this study and other research indicate that many teens also give in to other sources of distraction.

The same AAA study found that teenagers engaged in various non-technological distractions. According to The Huffington Post, about 17 percent of the observed accidents occurred because teenagers were simply looking at objects. Other common factors were grooming, reaching for items inside the vehicle and singing or moving along with music.

Another recent study suggests that many teenagers engage in much more outrageous and unnecessary distractions while driving. According to National Public Radio, Oregon State University researchers found that 27 percent of teens change their clothes or shoes while driving. Other risky distractions that were identified in the study included doing homework, applying makeup and putting in contact lenses.

Although many of these distractions aren’t explicitly illegal, they can still be highly dangerous. Many require teens to take their hands off the wheel or their eyes off the road, and virtually all of them create mental distraction. This may leave other motorists facing a significant risk of preventable accidents.

When distracted teenagers cause harm to their passengers or other drivers, those victims may have recourse. Anyone who has sustained injuries in a distraction-related action should consider discussing possible legal options with a car accident attorney.